Exploding an architectural myth, online learning to expand your horizons, and fantastical yet future perfect building with bamboo

If you’ve ever studied design or art, or even if you’re just an enthusiast, you’ll no doubt have heard of the ‘golden ratio’. It’s a magical, mathematical equation that is said to be at the heart of the most pleasing aesthetics. Simply put (and believe us, it is difficult to put it simply), two objects are in the golden ratio if their ratio is the same as the ratio of their sum to the larger of the two quantities. Get it? Us neither. The value this apparently works out to is usually written as 1.6180. It’s been a ratio that has been linked to designers and artists for centuries – think Da Vinci, Le Corbusier, Salvador Dali – and retroactively attributed to some of the greatest buildings – cue The Parthenon and the Pyramids. Trouble is, it’s all rubbish. Well, that’s according to a professor of mathematics at Stanford University who says the number is irrational – its decimal points go on forever – and so can’t be applied to anything in the real world. Self-same mathematician goes on to say that a legend has grown up around the golden ratio that has no basis in fact or in history and today’s experiments show that humans can’t discern one golden-ratio rectangle from another that’s not quite so fortunate. Life, and our appreciation of beauty, is far more random than that. It’s a relief really. Now we can all go back to our drawing boards and be creative without a mathematical myth getting in the way.

Amidst the pandemonium of the pandemic, many students have had to embrace online education and exams. While we think there are definite benefits to being able to front up in a classroom and ask the curly questions of the lecturers (or distract them with subjects somewhat off piste), this lockdown has reminded us that there’s a world of learning to be had behind the laptop screen. That’s why we were excited to see that Dezeen, an influential architecture and design publication that has been in business for 21 years, has just launched a listing page for architecture, interior and design courses that is a brilliant resource for anyone who wants to pursue these careers, to upgrade their degree or even just dabble in a short course for interest. Remote learning programmes mean we can be languishing in Aotearoa, planning the next picnic, or expanding our minds with a view to making our homes a better place to shelter. A current snapshot of the international offerings include: a month-long programme from the Passive House School in The Netherlands; an interior-design degree (with Honours) from the National Design Academy in Nottingham, England; and a course which teaches participants how to hand-sketch interior perspectives run by boutique London academy, Behind Canvas. You can even take a masterclass in innovation at the Royal College of Art. So, if lockdown fever is getting you down and you need a new challenge for the new year, don’t just sit there – get involved. You never know what you might learn. Visit www.dezeen.com/courses to find out more.

Some years back – thinking perhaps a decade! – Ted Talks were one of the few things online worth watching. Then they seemed to fall off the radar for most of us in favour of the pure escapism of Netflix (if you’ve already watched Squid Game like the rest of the planet, delve deeper to find Bo Burnham: Inside which was shot during the pandemic all in one room and is a social commentary by the American comedian that is funny, then gets funnier and then really rather sad). Anyhow…we digress, because we’re advocating for a revisit of the Ted Talk and what better place to start than with Magical Houses, Made of Bamboo in which sustainable designer Elora Hardy showcases the most incredible feats of engineering and design, in her houses in Bali. Who knew that there were more than 1450 species of bamboo in the world? According to Hardy, bamboo has the tensile strength of steel and the compressive strength of concrete. But…problem: it weathers and gets eaten by insects – not very sustainable. Hardy and her team have come up with a way to treat bamboo, using borax salt, and then they worked with the natural attributes of the material, mainly its curves, in collaboration with artisans and trained architects, to come up with a series of solutions where there are no straight lines, only straight thinking about how to leave a better footprint. This may sound all very idealistic, but we challenge you to watch this short video and not be impressed by the superlative beauty of the structures – houses, schools, bridges – and come away feeling better about humanity.   http://www.ted.com/talks/elora_hardy_magical_houses_made_of_bamboo? 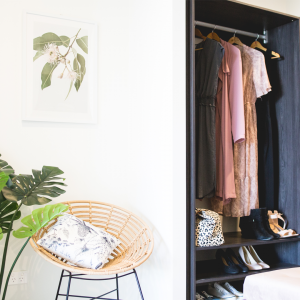 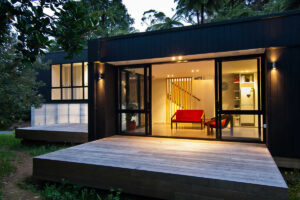 There are some projects that get so far and then, for one reason or another, are given the chop. Here Box™ architect Tony Borland-Lye laments