We asked four Box™ team members to highlight some memorable style-setting and pragmatic design details of homes they’ve worked on.

Ensuring a building is weathertight is an important part of the role for architectural technician Conor O’Brien, who has been draughting up Box™ homes on the computer for three years now. As a child, Conor loved art and was good at maths. His dad was a builder so which route to take? Studying architectural technology proved the best of both worlds and, “it suited who I am” he says.

He must rather like subterfuge too, because he enjoys the surprise in store at a project in Mount Albert. A tall folding cabinet door in the kitchen looks like your standard pantry cupboard… until it sandwiches open. Only then do visitors discover that it’s more like a secret portal that leads to a hidden scullery, laundry and garage. “That’s very practical for the owners, but also pretty awesome,” says Conor.

One of his favourite aesthetic features is the screening details that Box™ often includes – both inside and out – particularly those that channel a view. Conor loves a Waipu holiday home, completed a couple of years ago, for this very reason. Sweep into the driveway from the road and the house settles subtly onto its site. Cedar screening flanks the entrance beneath a portico and a stairway corridor, descending the hillside to the glass slider that is the front door. The screening directs the eye straight down the axis of the home, beyond the entry and on past the living room to focus on the spectacular coastline.

At one stage Ron Kumar thought of becoming a mechanic, but a stint underneath the bonnet in an oily workshop swiftly sent him off to his other passion: architecture and the built environment. Ron says he loves his career as an architectural technician, facilitating a design vision to reality through documentation.

An elegant solution to a practical challenge is one of his highlights of his three years at Box™. In the hinterland hills of Pataua North is a home with an incredible elevated aspect over the surrounding landscape. Although the site appears untrammelled, a strict building platform determined the extent of the new building location, which meant the team couldn’t initially extend the foundations of the house and deck to take full advantage of the view. The solution was to cantilever the ends of the building out from the permitted build area, resulting in a house that appears to float over the ridge. Ron likes the cross-brace detail on the project, stainless-steel members that are both decorative and structural. “I find it interesting that something so sleek and streamlined can support the deck,” he says.

Aesthetically, a recent stand-out was the modernist project in Mangawhai, which featured a 28-metre lightweight pavilion set cantilevered on a concrete-block plinth. On arrival the metal and cedar façade, which faces the driveway, is low key and discrete. There’s little to suggest what lies beyond the opposite elevation. A carport beneath the home punches through the building volume to reveal a peek of the view, continuing the conceal/reveal architectural quality.  The ocean view is only showcased in its entirety once the viewer has entered, and ascended the open riser internal stairs, to the second level of the beach holiday home.

Design lead Tim Hogarth is a modernist to his core. “I’m a rationalist; I like the celebration of the honesty in materials, and I believe mid-century design is an architectural period that will continue to be relevant for many decades to come.”

Tim says that, over the years, Box™ has developed its own signature design vernacular. Although individualised, the homes have a certain aesthetic; rather than being random and disparate, they read together as a body of work. Repeating the use of certain materials and design solutions is why Tim likes the 400mm slot windows that Box™ uses regularly as part of the architectural language. The narrow windows are typically designed vertically and carefully placed, and are implemented on elevations where privacy is compromised or views are not prioritised. He likes the gridded line-up of windows, creating a thoughtful aesthetic statement, while providing great function. “I like their repetitive, balanced geometry,” he says.

Another trademark that Tim picks out for its architectural appeal is vertical cladding, either in grooved boards or weatherboard. “Horizontal cladding can appear conservative in the wrong application,” he says. “Vertical is really sleek and looks 21st-century.” The metal fascia above the entrance that Box™ has recently started to employ is another design feature he believes will become a signature. Painted a contrasting colour to the cladding makes an eye-catching difference to the façade. In a recent Grey Lynn project, the fascia was painted Resene ‘Pioneer Red’ to connect with the terracotta tones used in the neighbourhood.

Delight in the detail

As a design lead at Box™, Nicola Liew routinely visits sites every 2 to 4 weeks during the build process – and counts it as one of the most satisfying parts of her job. “I enjoy seeing the excitement through the client’s eyes, as their home is realised.” She finds the responsibility of delivering homes rewarding, “I love the collaboration and the result of the end architectural product.”

Removing form from function is near impossible for a designer, so when choosing an aesthetic and practical feature there is a natural crossover. Nicola loves the detail that went into the exposed trusses on a Baddeley’s Beach holiday home that was handed over to client’s earlier this year. The project was a modernist take on a traditional farmhouse barn and the trusses were reimagined as a contemporary build element, referencing both architectural periods. “The large volume the trusses give the living spaces has expanded the traditional Box™ aesthetic, which is exciting.” The challenge for the builders and electricians was to hide the fixing and wires between the beams that were sandwiched together.

On another project in Tairua, Nicola designed a balustrade with a handrail in solid oak, with a fine negative detail running beneath. This simple addition elevated a ‘must-have’ into something sleek and stylish. “I love negative details because they are often a really inexpensive way to achieve a more bespoke design outcome.” 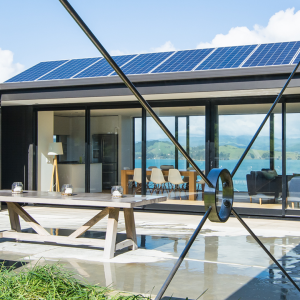 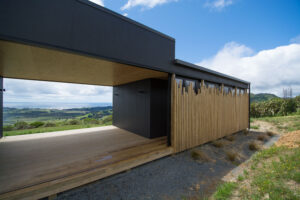 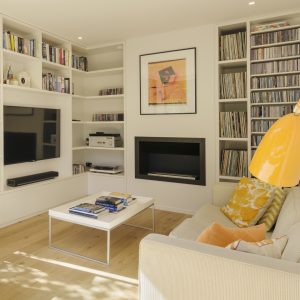 Fill your house with stacks of books, in all the crannies and all the nooks, beseeched Dr Seuss. Here are some rather more stylish ways 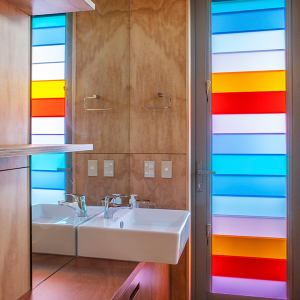